Auckland to Wellington: Why you should take the Train

Dazzling vistas flow past, with the light blue water and rolling green hills contrasting the stark white ridges on the horizon. As the train Auckland to Wellington meanders through this scenic terrain on a journey across the North Island, the fresh air from snow-capped volcanoes fills the open-air carriage around you. 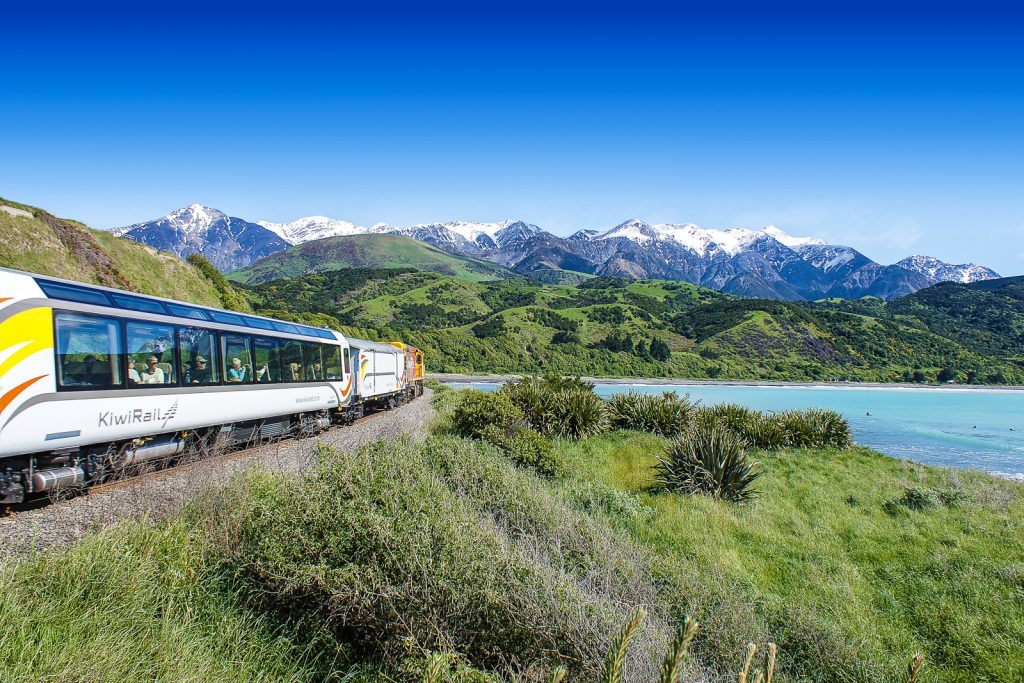 There are a number of amazing places to visit in New Zealand, both on the North Island and the South Island. These destinations are even more incredible because of the journey taken to reach them. The trip is packed with picturesque views of the country’s unique terrain. One of the best ways to get a comprehensive look at the beauty of the North Island is to take the Northern Explorer train journey.

KiwiRail operates a tourist Train Auckland to Wellington and Wellington to Auckland, called the Northern Explorer, there are three services per week. The line itself covers a total distance of 682 km and takes 11 hours to complete.

Since this rail connects New Zealand’s two largest cities it is the perfect activity to add to your New Zealand Itinerary. Auckland has a population of 1.5 million and Wellington houses 0.5 million which is a significant chunk of the country’s 4.3 million people. Even though Auckland is the largest, and certainly one of the most well known, Wellington is actually New Zealand’s capital city.

The Northern Explorer is a trip that has been available since 2011. This train was built in New Zealand and showcases some truly spectacular landscapes through its panoramic windows. From the licensed café to the open-air carriage, everything onboard is there for your comfort. You can sit back in comfort and enjoy the scenic views that rush past your window. 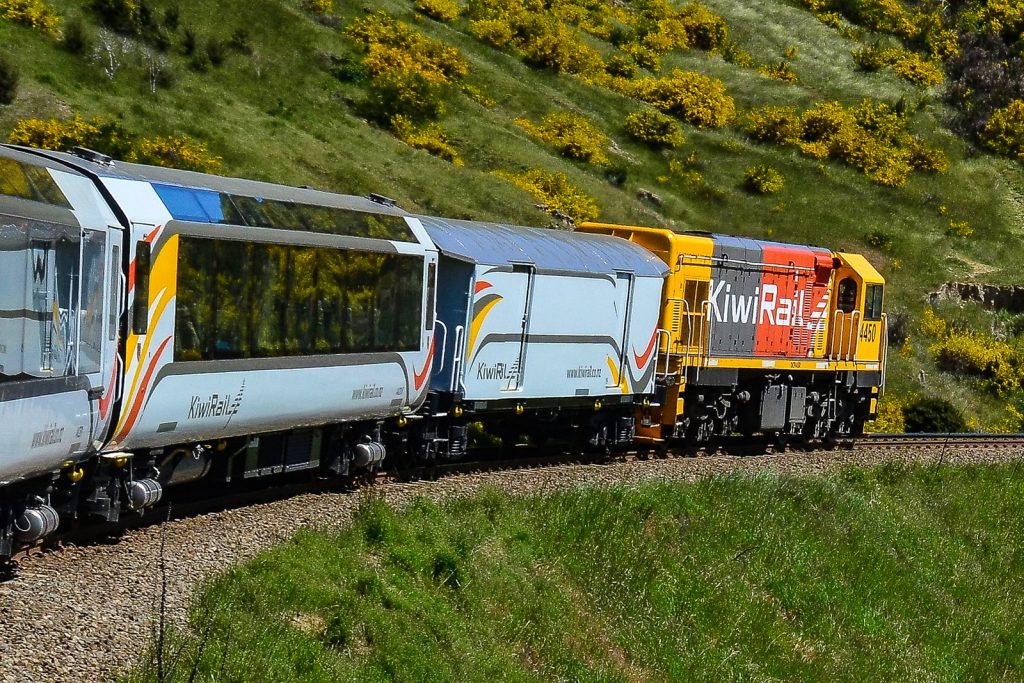 While driving yourself along the same route does have its own benefits, nothing beats the comfort of being able to move freely around and take photographs at any point in the trip without having to stop. Sit back and relax on the train Auckland to Wellington, without having to take the wheel for yourself as you watch the New Zealand landscapes roll past.

Our carriages were designed to showcase this fantastic landscape, with the phrase ‘the view is paramount’ becoming the guiding principle behind the designs.
Northern Explorer by KiwiRail

Engineering Marvels along the Railway

The railway line itself is known as the North Island Main Trunk. The line is mostly single track and employs frequent passing loops for traffic. While the Northern Explorer tour may only have been available since 2011, the railway line itself became operational in 1909 and has been described as an engineering miracle.

Hapuawhenua Viaduct is one of the many impressive viaducts along the North Island Main Trunk. At 414 m long, this incredibly well-engineered structure was a true wonder of its time, being completed in 1987. The viaduct crosses a spectacular valley, giving you incredible views of the landscape and New Zealand’s unique vegetation.

The Raurimo Spiral is another indicator of New Zealand’s excellent engineering. The train tracks snake back on themselves in this spiral, allowing for a significant change in altitude over a very short distance. The train goes very slowly at this point because the turns are sharp and the downhill slant is great enough to pull the train along the rails.

The real highlight of this incredible journey by train Auckland to Wellington is when you pass through Tongariro National Park. This park features a number of magnificent, snow-capped volcanoes which line the horizon in an impressive display of might. 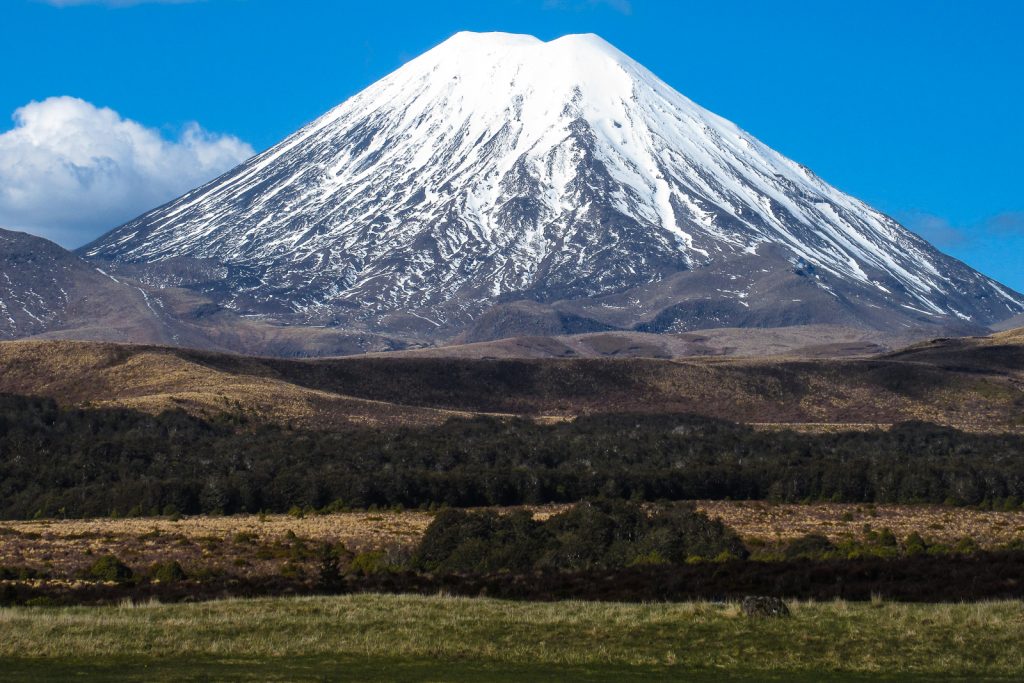 Tongariro National Park is home to three active volcanoes. While they may have a blanket of snow coating their outer crust, bubbling molten lava lies beneath the surface. New Zealand’s largest active volcano is among these three and is known as Mt Ruapehu. These snowy slopes play host to two commercial ski fields. Experiencing this exciting activity on the slopes of Mt Ruapehu is something that I will never forget! If you’d like to learn more about this, feel free to visit my Whakapapa Ski post.

The journey through Tongariro National Park, with its three spectacular volcanic mountains -Tongariro, Ngāuruhoe and Ruapehu – is a highlight, a place of extremes and surprises, where snow-blanketed fields, ancient lava flows and dense beech forests can be seen side by side.
Northern Explorer by KiwiRail 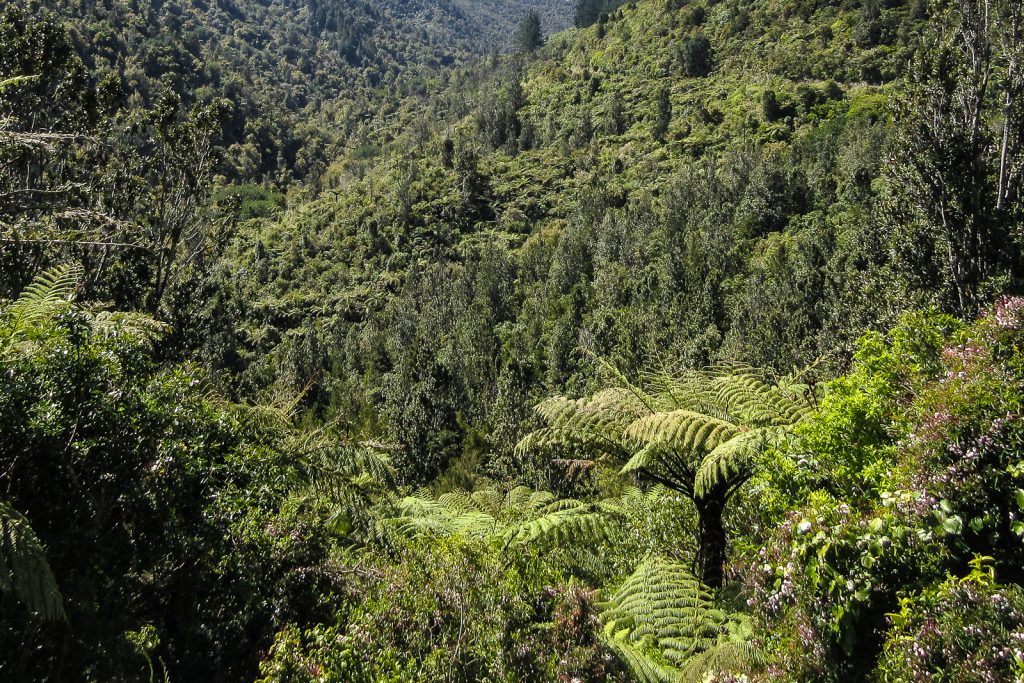 The journey will not only allow you to see these icy slopes, but also a wealth of other sights unique to New Zealand’s landscape. The rocky coastline bears a mesmerising beauty as you glide past it in the comfort of the cabin. You’ll have excellent views of lush trees coating gentle slopes as well as soft meadows filled with colourful wildflowers. 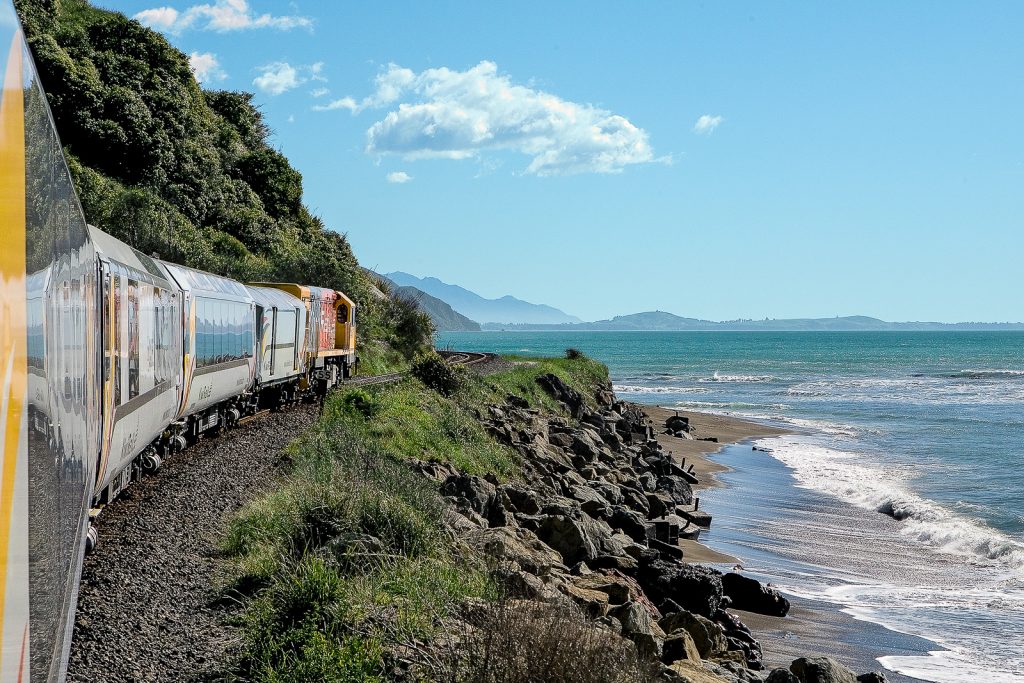 Touring this picturesque country by train is an experience not to pass up. There is no doubt that it should be part of your New Zealand itinerary. If you would like to follow a detailed itinerary of the New Zealand then take a look at my North Island Itinerary.

Auckland is New Zealand’s largest city and will likely be the place where your journey begins. While it’s possible to do the Northern Explorer trip from Wellington to Auckland, to take the train Auckland to Wellington is a far more popular route. The reason for this is that most international flights land in Auckland and this train trip is the perfect way to start off your New Zealand Itinerary. 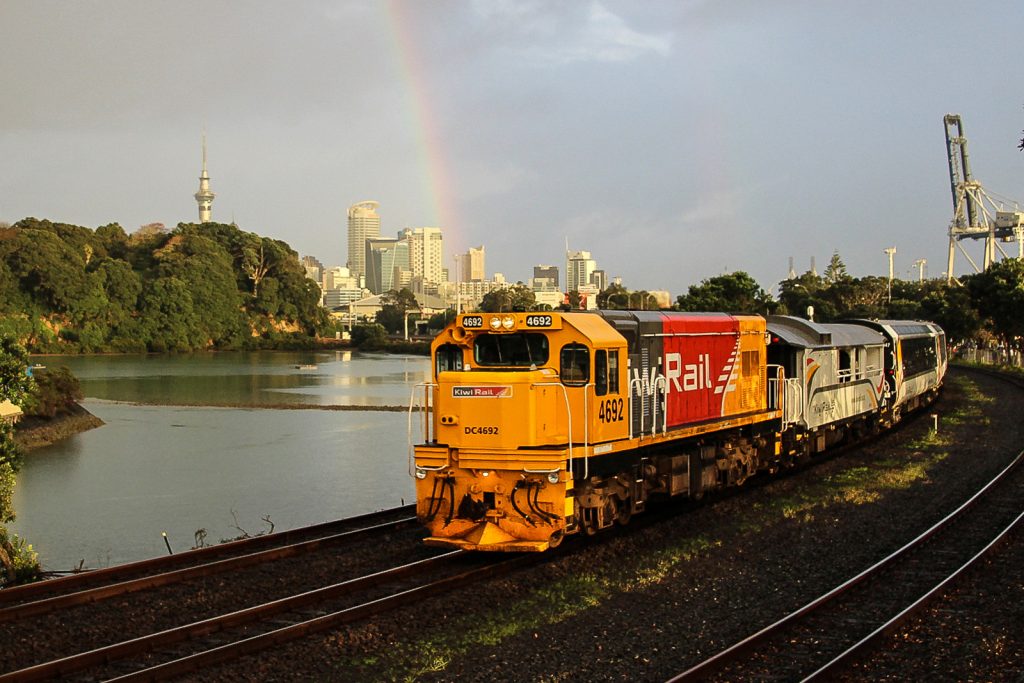 The suburbs of Auckland are littered with small hilltops, many of which are dormant volcanoes. These volcanoes have left a dramatic crater in their wake, making for an incredibly unique landscape. The clean air and phenomenal views are made even more clear from the top of these interesting hills.

Auckland is a thriving city with plenty of activities and sights on offer. It is also one of the best places to visit in New Zealand. You can dine in picturesque luxury at the top of the sky tower, where a revolving restaurant can be found. If you’d like to explore the city on foot then you can join one of the many walking tours. If premium quality wine tasting sounds tantalising, then take a short ferry trip to the nearby island of Waiheke. This will surround you in a number of excellent wineries.

Of all the places to visit in New Zealand, Wellington stands to be one of the greatest locations. It serves as the perfect link between the North and South Islands, separated by the Cook Strait. The beauty of this city, framed by the shimmering ocean and rolling green hills is almost unparalleled. 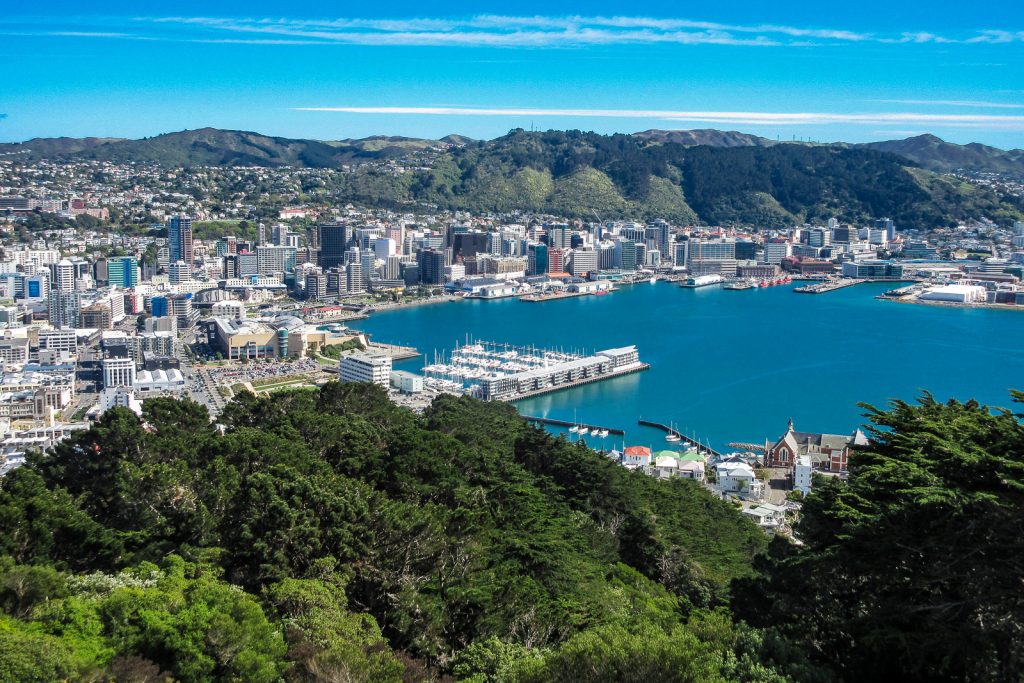 If you wake up and set off in the early hours of the morning, you can enjoy a panoramic view of this marvellous city from Mt Victoria as the sun rises over the horizon. To see more of New Zealand’s incredible vegetation, take a trip in the cable car to the Wellington Botanical Gardens. 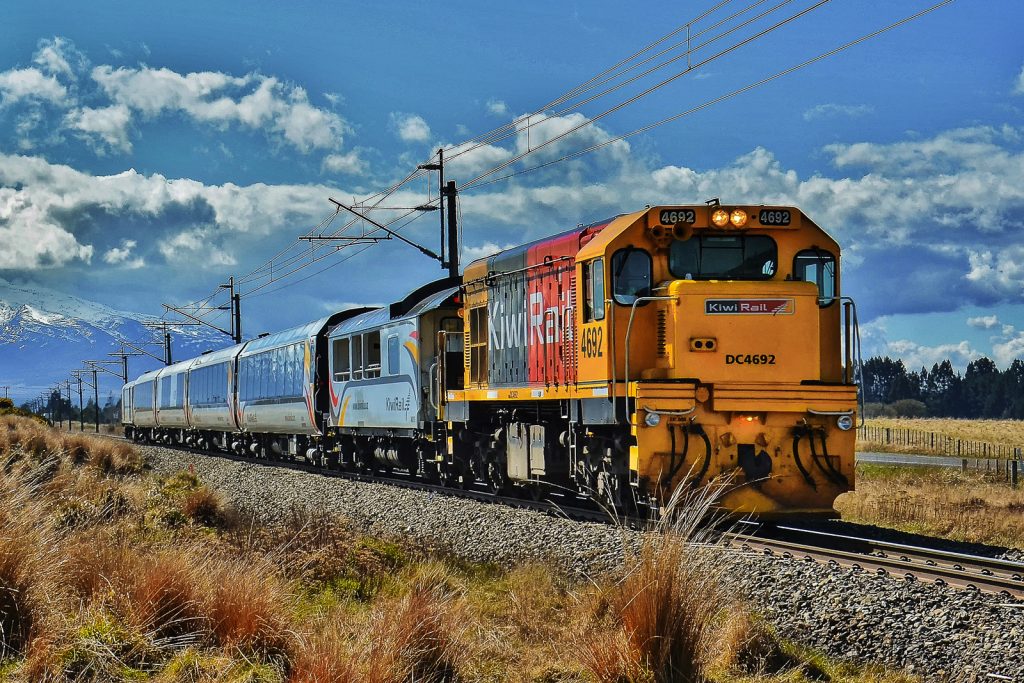 Travelling a long distance by train is a truly incredible experience, particularly in a country as scenic as New Zealand. Taking a train from Wellington to Auckland or vice versa provides you with a comprehensive view of the North Island.

This train journey should definitely be part of your New Zealand itinerary. If you’re feeling inspired to learn more about epic train journeys across New Zealand’s beautiful countryside, then read more about my TranzAlpine train trip across the southern alps.

Top 10 things to do in South Island New Zealand

25 Photos to Inspire you to visit New Zealand

Top sights along the road from Queenstown to Milford Sound

World’s most scenic Journeys; Tranzalpine by Highway or Railway?

How to visit Mt Cook National Park and Tasman Glacier

Do you already like us on Facebook?
Do not ask me again for Facebook
Continue to the article »
4.6k
SHARES
ShareTweetGooglePinterest
RedditStumbleupon
We use cookies to ensure that we give you the best experience on our website. If you continue to use this site we will assume that you are happy with it.Ok