With white-sand beaches, lush green mountains, a rich cultural history and world re-known landmarks; Rio de Janeiro is more than just blessed; As Christ the Redeemer gazes down on this sprawling South American metropolis, and the rhythm of the world’s largest Carnival reverberates with millions of Brazilian revellers partying on the streets; Rio is more than just something special. It has a presence like no other city, which will leave you with a sense that Rio really is one of the greatest cities in the World to visit.

I’ve been visiting Rio de Janeiro for over a decade. During that time the city has slowly modernised and transformed itself by hosting a World Cup and an Olympic Games. But even these global events don’t compare to the energy and choreography which the annual Carnival week transcends. I’ve been lucky to visit during Carnival, which I would highly recommend being on every traveller’s bucket list. 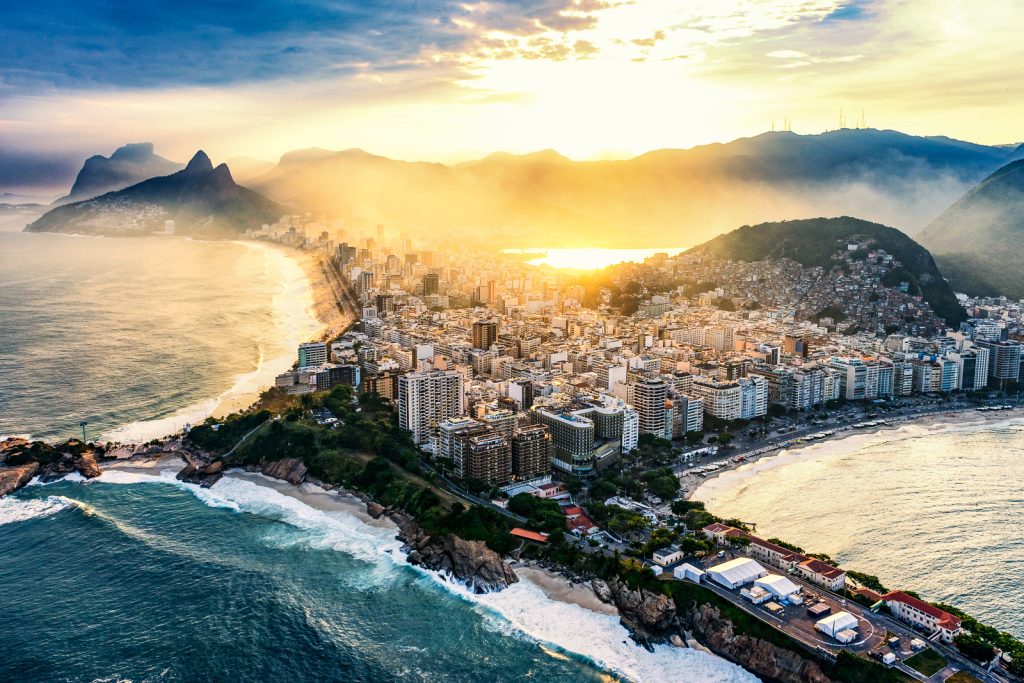 As the beats of Rio’s bossa nova soundtrack plays out across the sun drenched beaches, surfers take to the pounding surf of the Atlantic Ocean. If lazing the days on white-sand beaches, or touring the amazing sights or digesting the Brazilian culture are your thing, Rio is a city that accommodates every traveller on every budget. Here I’ll give you my top list of unmissable things to do in Rio!

The statue of Christ the Redeemer looking over the city is perhaps the most iconic cultural image of Rio de Janeiro and a symbol of Christianity across the World.  Listed as one of the new Seven Wonders of the World, Cristo Redentor is an art deco style staue of Jesus Christ built in the 1920’s atop Corcovado mountain at 2,300ft elevation.

As our number one of the many landmarks in Rio de Janeiro to visit, Christ the Redeemer statue can be visited by taking a ride to the top of Corcovado mountain. Wait for a clear sky day, and the views from atop Corcovado are truly astounding and a highlight of your trip to Rio de Janeiro. You will be able to see the majority of Rio landmarks in Centro, Sugarloaf, Copacabana, Ipanema and Leblon.

There are only 2 ways to get to the top of Corcovado; the train or by minibus. The train gets booked up, so you need to arrive early in the mornings to get a ticketed departure, especially on weekends. Tickets are sold for timed departure slots. The second method is by minibus. The Parque Nacional de Tijuca has a large tourism center at Paineiaas, which is the gateway to Christ the Redeemer. The road to the top is now gated and controlled so you cant walk up, you have to take a minibus with the National Park. It’s a ticketed system (41 Reals), with timed departures every 5 minutes, so expect lengthy waiting times at Paineiaas during peak periods. To get to Paineiaas you can use a taxi or minibus service. Corcovado car service operates a fleet of minibuses from the Corcovado train station to Paineiaas for 30 Reals (return ticket).

Sugarloaf Mountain is another panoramic viewpoint from which to take in the dazzling sights of Rio de Janeiro. Whilst not as lofty as the Corcovado Mountain, Sugarloaf provides a reverse view of Urca, Copacabana and the front view of Christ the Redemeer Statue. The name Sugarloaf comes from the 19th century shape of a sugarloaf, which was the dome like shape that refined sugar was produced in for sale.

The peak of Pao de Acucar (the Portuguese name for Sugarloaf Mountain) is at 1,299ft and can be visited by cable car. Visitors ride on 2 separate cable cars to reach the very top of Sugar Loaf mountain. The first cable car ascends the Morro da Urca (722ft) and then the second car rides to the top of Pao de Acucar. The Sugarloaf Mountain cable car was featured in the James Bond film Moonraker in 1979. Made famous by the scene where the villain Jaws (Richard Kiel) fights with James Bond (Roger Moore) on top of a cable car.

Avoid busy periods (late morning, and early afternoon) and for the best city views visit on a clear sky day, especially if you want views of the Christ the Redemeer Statue. After your visit to Sugarloaf Mountain, consider a visit to Urca, which is a small residential area with a waterside promende at the base of the Sugarloaf’s granite slopes.

3. Carnival at the Sambadrome

Carnaval, is considered the largest carnival in the World. The millions of revellers celebrating Carnival in the streets of Rio is a world renown image. At the heart of the Carnival festivities is the Sambadrome parade.

The Sambadrome hosts a nightly parade of Samba schools from Rio, known as the Samba School Parade. Each Samba School present their floats with choreographed dances and costumes through the huge Sambadrome. Its a spectacular show of music, dance, rhythm, colour and energy. Each school has 45 minutes for their parade, filling the entire length of the Sambadrome with their performers. There are around 6 parades, each night so the entire parade lasts for hours!

Carnival is a 6 day event in Brazil which runs from the Friday to Wednesday. The Monday and Tuesday are bank holiday days in Brazil. For 2018 Carnival dates are: February 9th – February 14th 2018. Our top tip for Rio Carnival if you want to go to the Sambadrome; The “Finals” which are the most popular parades are held on the Monday and Tuesday each year. These tickets sell out at least a year in advance; they’re extremely hard to book and costly too. Whereas the Parades on the Friday through Sundays are from the lesser schools, but just as impressive nonetheless! So I would highly recommend timing your Rio travel plans for the start of Rio Carnival should you want to attend the Sambadrome parades. Tickets were available even a few weeks before, for these first days of the parade!

Concrete apartments and hotels gaze over this tropical strip of white sand, fringed by a 4km long palm tree lined promenade. On weekends the locals join tourists on the beach for Caipirinhas (Brazilian cocktail) , beach soccer, volleyball and sunbathing. Copacabana is a popular area to stay in and the roads behind the beach are packed with cafes, bars and shops. All the major hotel brands have properties along Avienda Atlantica which runs side by side along Copacabana Beach. The Pestana Rio Hotel has a roof top bar which is accessible to the public, with stunning views in all directions of the beach. But the top hotel stay in Copacabana is the opulent Copacabana Palace hotel; see #10.

As featured in the bossa nova song “The Girl from Ipanema“, Ipanema is an affluent neighbourhood with a beautiful beach adjoined by two Granite mountains (Dois Irmãos). A rocky peninsular joins Ipanema with Copacabana at Pedra do Arpoador, which is a great spot for watching the sunsets. Ipanema has tree lined avenues with bars and restaurants. At the western end of Ipanema is the neighbourhood of Leblon.

The iconic yellow Bonde, Santa Teresa Tram meanders through the cobble-stone paved and brightly coloured neighbourhood of Santa Teresa. As one of oldest street railways in the world (since 1877), it is a historic part of Latin American engineering achievements. The hillside neighbourhood of Santa Teresa is best explored on the tram line as it journeys from hilltop to downtown by crossing the  impressive Carioca Aqueduct. Many viewpoints off panoramic views of Centro (downtown) district including the Cathedral (see #8).

The tram line was suspended in 2011 after a serious accident, and has since undergone redevelopment. It was meant to be fully open for the 2016 Rio Olympic Games, but it has since only re-opened on a small part of the line and is not expected to be fully open until 2018.

The botanic gardens at Jardim Botanico in Leblon, offer peaceful respite from the frenetic action of Rio. It’s shaded palms offer a welcome break for sun-worshippers from the Rio beaches. The gardens highlights include a tranquil lilly pond and palm tree lined walking path.

The downtown skyline of Rio de Janeiro is dominated by concrete high rise office towers and intermixed with colonial architecture. As the financial heart of this sprawling South American city, office workers fill the restaurants and cafes during weekdays, and the area becomes more of a ghost town on weekends. The Santa Teresa Tram (see #6) runs from the Centro station and crosses the Carioca Aqueduct before ascending into the hillside neighbourhood.

A landmark property on Copacabana and in fact its probably the most well known hotel in the whole of Rio. Having hosted everyone from Hollywood legends to World Leaders, the hotel with its unique 1920s architecture, is a beautiful landmark to visit. Sitting at the poolside bar with a Caipirinha (The Brazilian national drink is a cocktail made of lime, sugar and Cachaca – a spirit produced from sugar cane) as the ocean breeze rustles through swaying palm trees has to be one of the top things to do in Rio de Janeiro.

Rio Landmarks Map – Top things to do in Rio

Pilots in Paradise: Island Hopping the Bahamas by Plane

Maldives Wanderlust: 20 Photos to Inspire Your next Holiday

We are a participant in the Amazon Services LLC Associates Program, an affiliate advertising program designed to provide a means for us to earn fees by linking to Amazon.com and affiliated sites.
3.3k SHARES
Close
Do you want to read more similar stories?

Do you already like us on Facebook?
Do not ask me again for Facebook
Continue to the article »
3.3k
SHARES
ShareTweetGooglePinterest
RedditStumbleupon
We use cookies to ensure that we give you the best experience on our website. If you continue to use this site we will assume that you are happy with it.Ok