You are flying across one of the most iconic city skylines in the world. Soaring over the “Big Apple” you can easily recognise all the major landmarks of New York City. Flying high above the Hudson River, the large windows of your NYC helicopter tour provide you with a birds eye view of the Statue of Liberty, Empire State Building and Central Park.

NYC helicopter tours depart from the heliport located on Pier 6 in lower Manhattan. Tour operators fly a variety of routes around the city, although the most popular trip and certainly one of the best things to do in NYC is the 20 minute flight along the Hudson river. This unique route gives all passengers sat on either side of the helicopter, unparalleled views of the cityscape.

New York is the largest city in the United States and one of the most popular cities to visit in the World. Read my top 15 things to do in New York for more NYC inspiration! 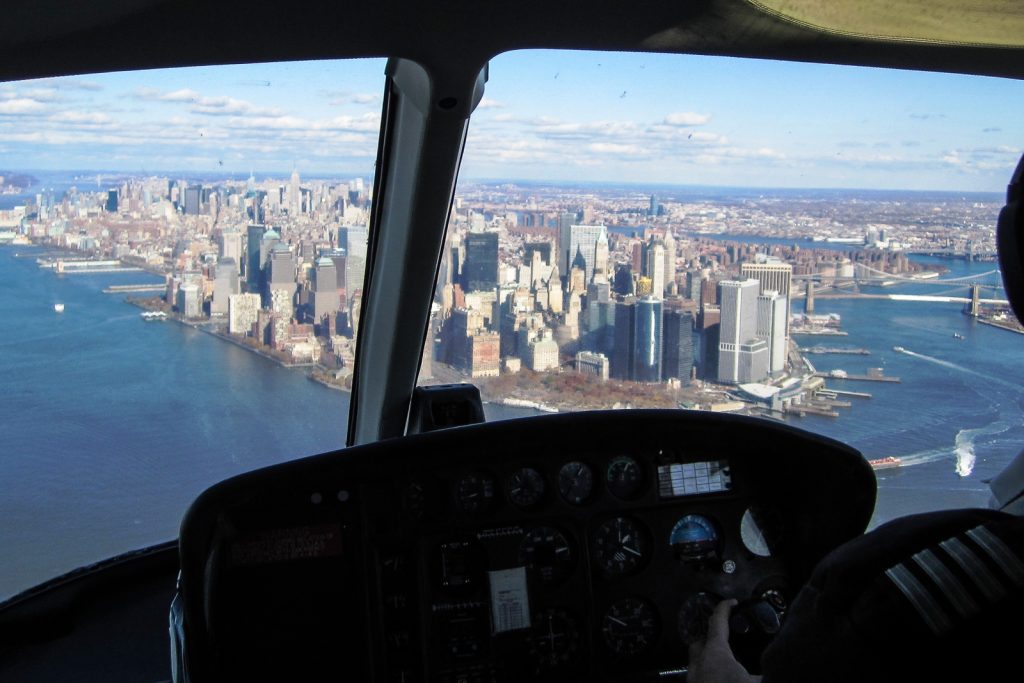 The route along the Hudson begins with a short hop from the heliport across New York Harbor with an overflight of Liberty Island and the world famous Statue of Liberty.

Join me on this aerial adventure as I take you on a tour of New York City and explain some of the many things to do in NYC and the best places to visit. 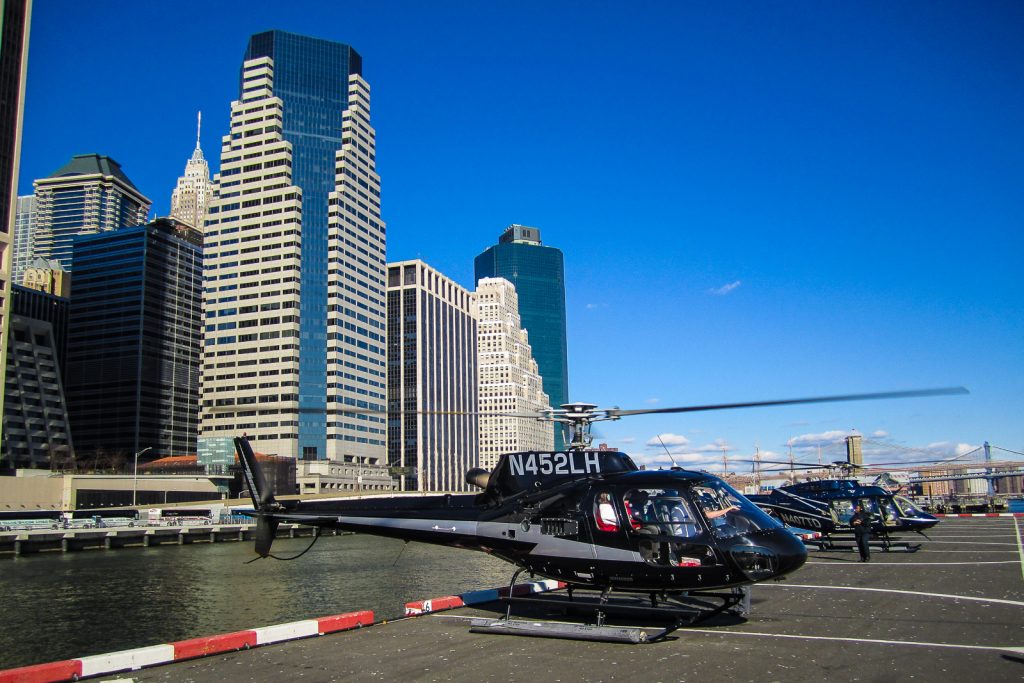 The Downtown Manhattan Heliport, on Pier 6, is the launch pad for NYC helicopter tours. Catering also for flight charters, business executives and celebrities because of it’s close proximity to Wall Street. The President of the United States uses this heliport for visits to New York.

The ground crew will lead you from the waiting area in the small terminal building out across the helipad to your helicopter. Strapping into your seat, the pilot begins the engine start. The blades of the helicopter begin thundering overhead until the aircraft lifts off the ground. 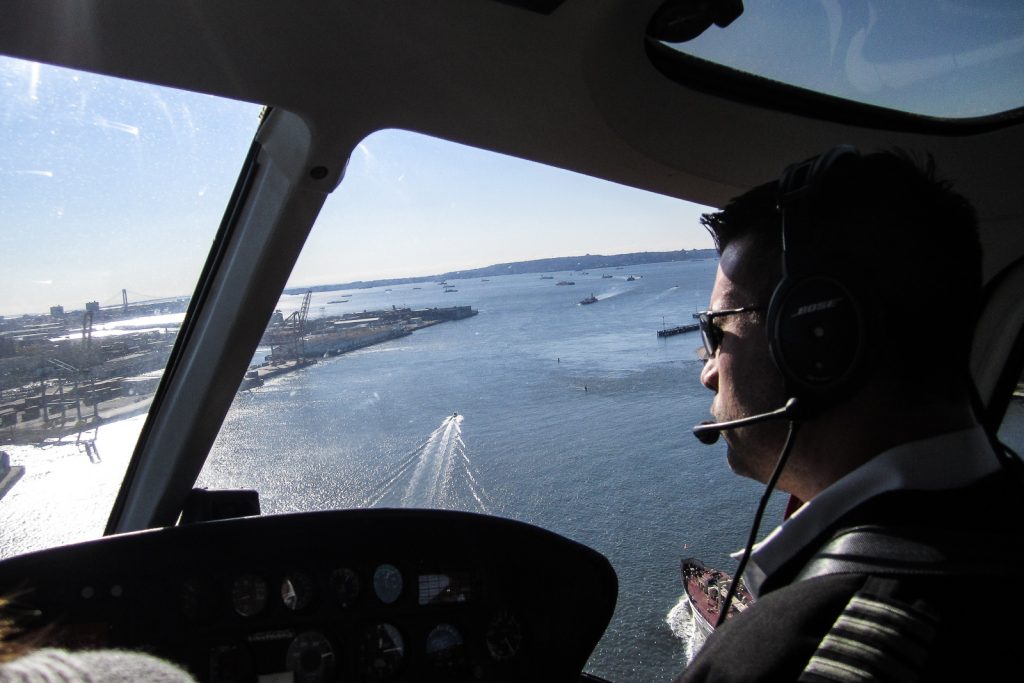 Flying south across the East River, Brooklyn and the Columbia Waterfront districts lie in-front. The docking cranes and industrial waterfront, are a hive of activity. The pilot flies over Governors Island, a national historic landmark which is open to the public. Ferries to Governors Island depart from the South Ferry terminal, just around the corner from the heliport at Pier 6.

World Famous Statue of Liberty glistens in a hue of green, the color of the copper sheets used for the skin. As the helicopter passes over Liberty Island you can see the tourists admiring this 305 feet tall statue built in 1886. 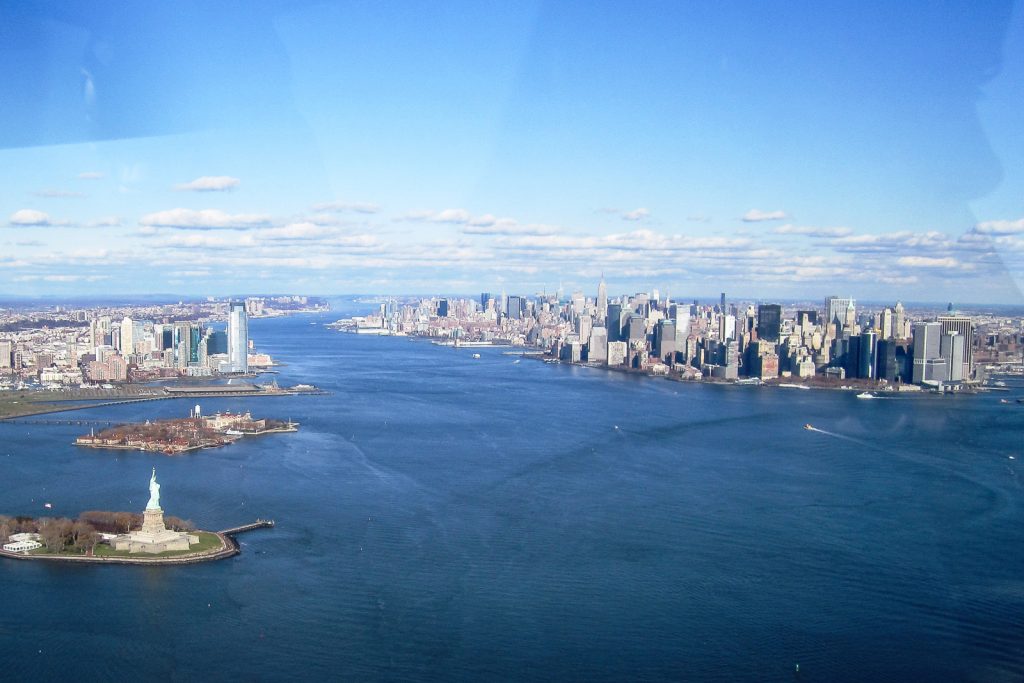 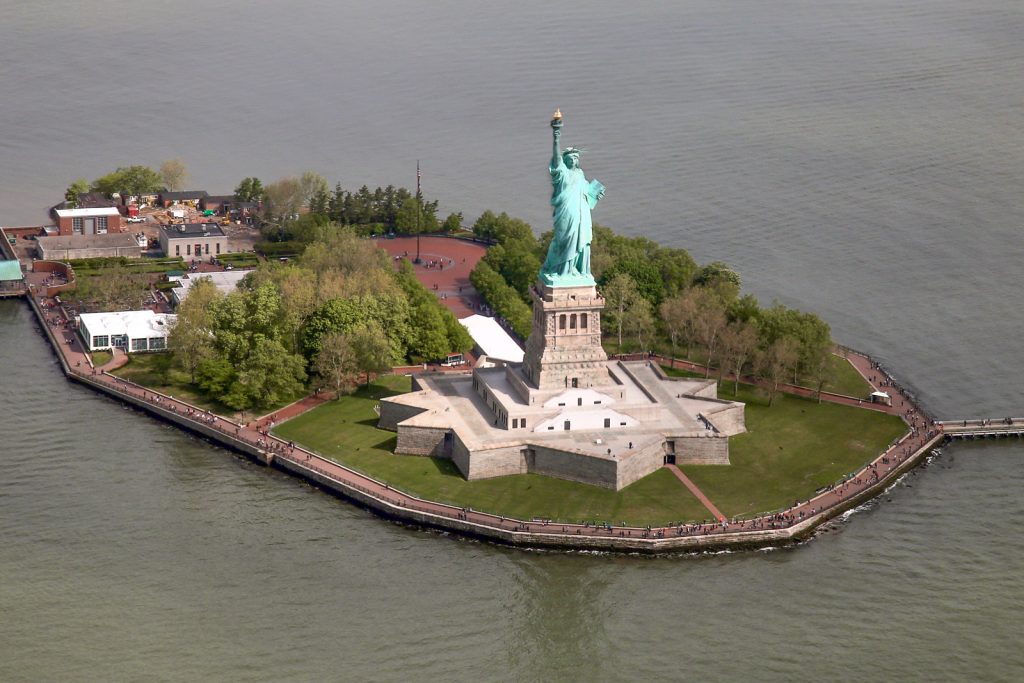 Liberty Island, a landmark itself, which you can survey from your lofty seat in the helicopter is one of the top things to do in NYC. Visitors can now climb to the top of the Statue of Liberty Crown, after years of closures and renovations. No elevator access is available so you will have to climb the 377 steps from the pedestal to the crown. Advanced reservations need to be booked on the National Park Service website. Ferries to Liberty Island depart from Battery Park in lower Manhattan.

Your flight then begins its navigation along the Hudson River. With a close flyby of the skyscrapers in lower Manhattan and wall street, don’t forget to catch a glimpse of the East River and the picturesque Brooklyn Bridge. Further along the East River are the Manhattan Bridge and Williamsburg Bridge. 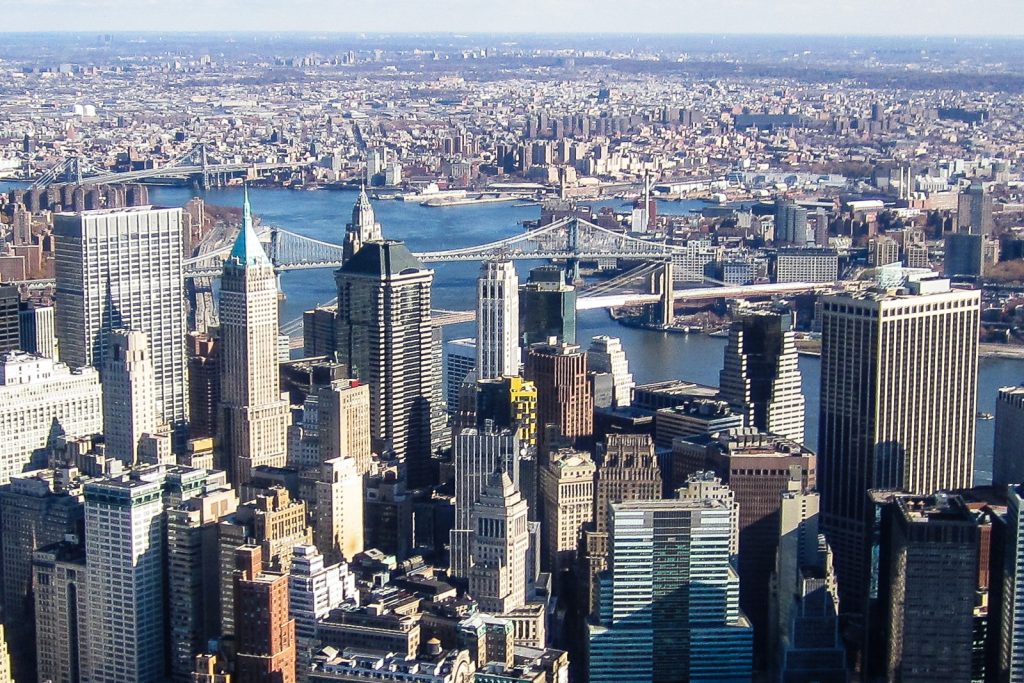 Hope for a blue sky, sunny day with horizon to horizon views! The low rise buildings of the Greenwich Village, Chelsea, the Meat Packing District and Soho are dominated by redbrick buildings and apartment blocks. These are great areas to explore on foot after your NYC helicopter tours. 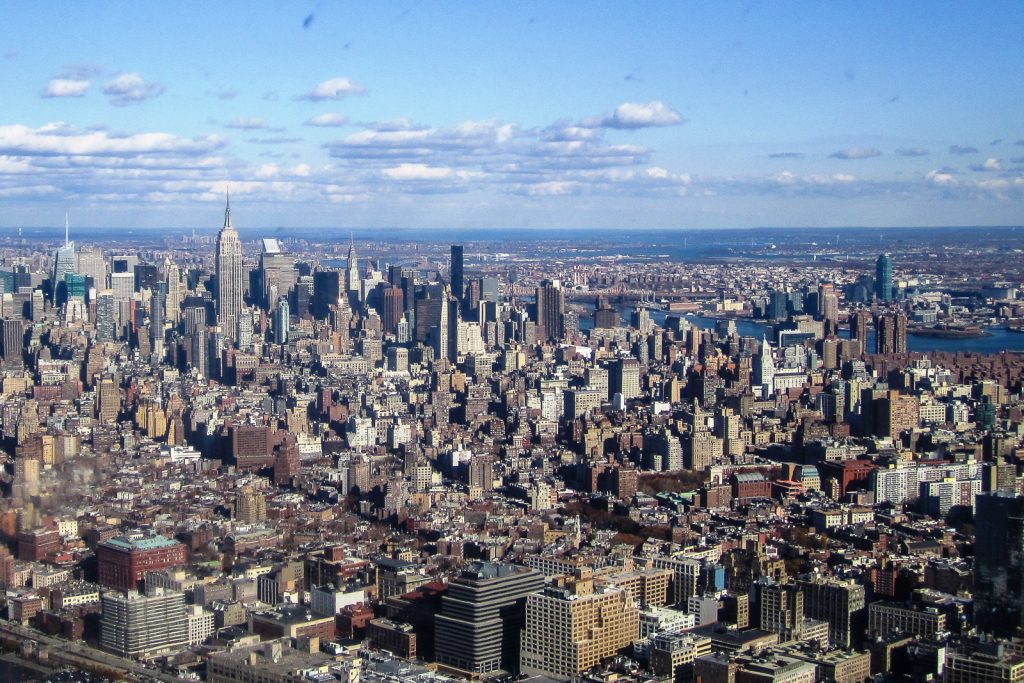 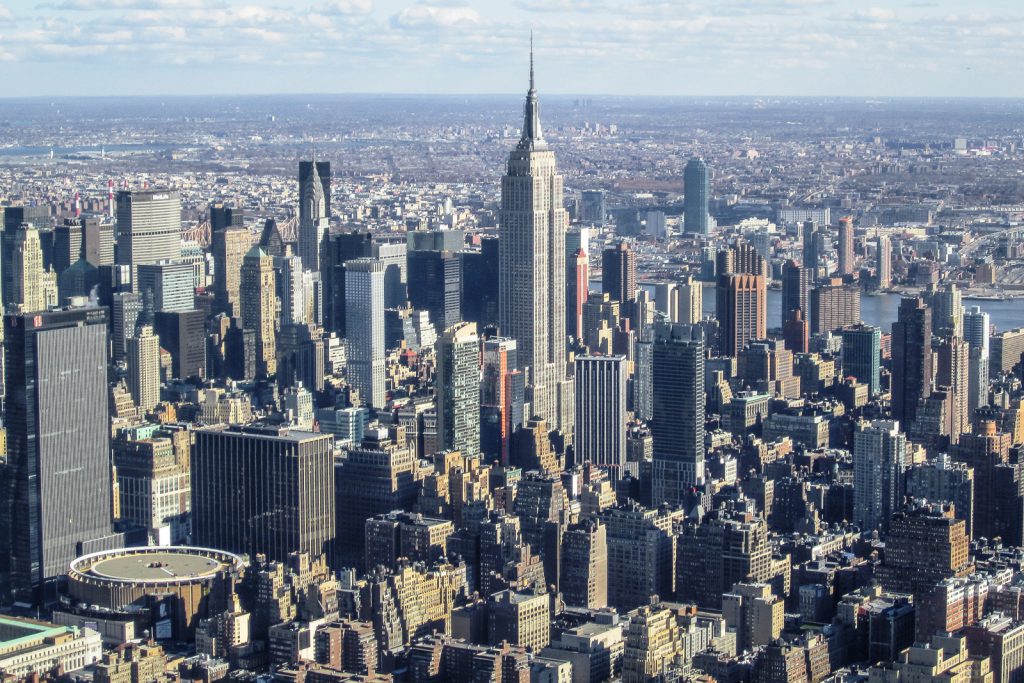 Madison Square Gardens, the worlds most famous arena, situated ontop of Pennsylvania Station is easily spotted, with its circular hamster wheel shape. Another famous landmark you can see from here is the Chrysler Building, another art deco-style skyscraper with it;s unique and highly recognisable ornamental crown. 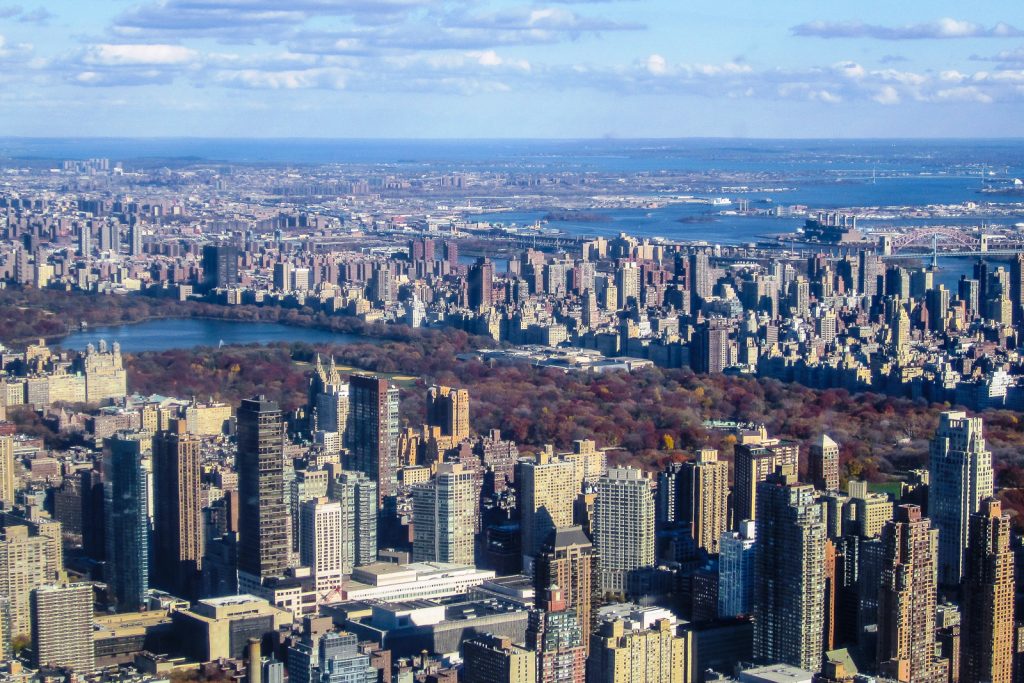 Autumn colours dominate the view of Central Park at this time of year. One of my top recommendations of free things to do in New York City, is taking a central park tour.  Located in the centre of the Park is the Metropolitan Museum of Art, another free attraction worth visiting.

In the summer, make your way to the boat house for a wonderful rowing experience on the beautiful lake in Central Park. Number #7 on my list of the Top 15 things to do in New York. 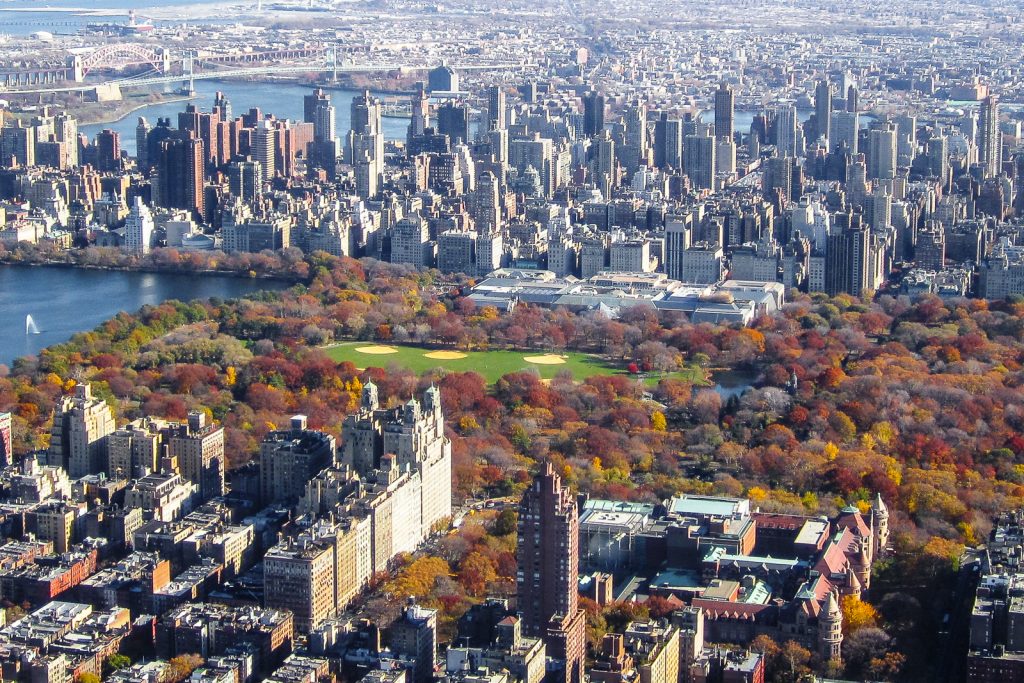 Miracle on the Hudson

Made famous by Captain Sully in January 2009 as the “Miracle on the Hudson“, the Hudson River provided the improvised runway which the airline captain used to glide his stricken airbus plane. Everyone survived and it was hailed as a heroic achievement. Clint Eastwood immortalised the flight in his film Sully released in the autumn of 2016. 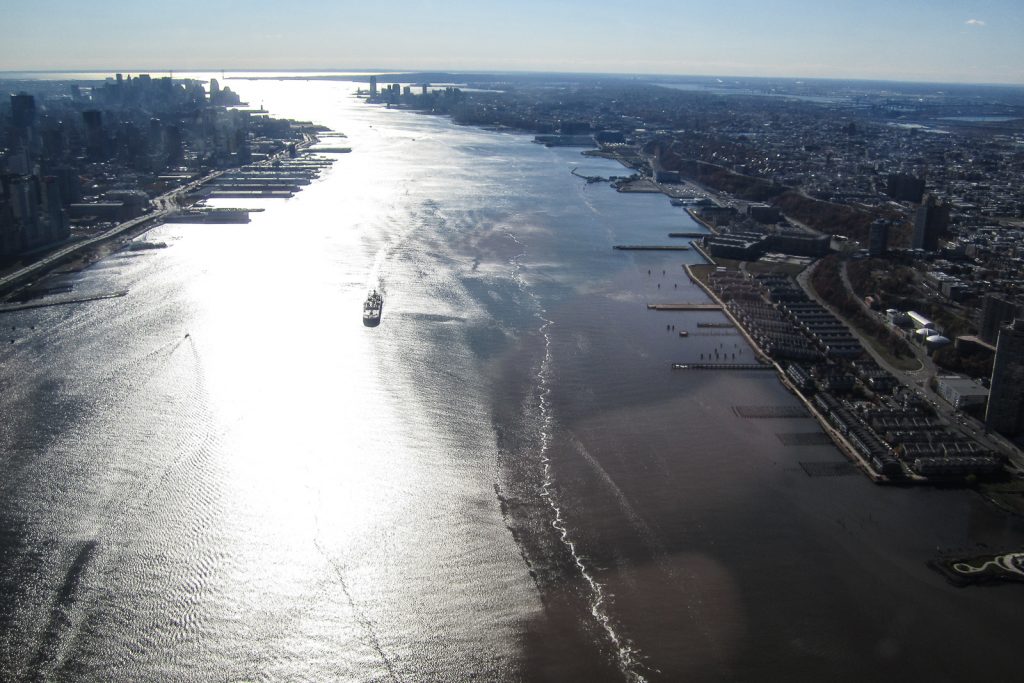 The Hudson River provides the state boundary line between New York and New Jersey. In the photo above, New York is to the left and New Jersey on the right. Reaching the furthest point along your NYC helicopter tour, the pilot turns around to fly back to the heliport. This gives the passengers sat on the other side of the Helicopter the front row seats to the New York skyline.

Read my top 15 things to do in NYC for more New York travel inspiration and information.

Best Beaches in Florida: Top 10 Places to go in Florida for a Beach Vacation

Why you must visit Miami’s iconic South Beach

234 SHARES
Close
Do you want to read more similar stories?

Do you already like us on Facebook?
Do not ask me again for Facebook
Continue to the article »
234
SHARES
ShareTweetGooglePinterest
RedditStumbleupon
We are using cookies to provide statistics that help us give you the best experience of our site. You can find out more or switch them off if you prefer. However, by continuing to use the site without changing settings, you are agreeing to our use of cookies.OkRead more